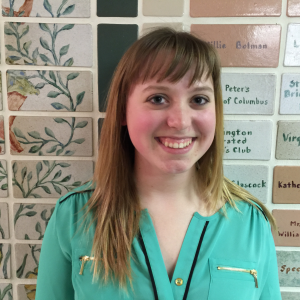 Meet 21-year-old Kaitlin Sutton.  She is a third year Student Music Therapist at the UMKC Conservatory of Music and Dance, has performed in Carnegie Hall, and has sung in the chorus behind Barry Manilow.  She’s also a GFWC Clubwoman.  As the speaker at the GFWC Beverly Shelton Girls Town Club meeting in November, Kaitlin heard about Girls Town, joined the club, and asked if she could do a music therapy session for the girls.

On February 9, Kaitlin provided the program for the GFWC Callaway Juniorette Club.  The girls loved her as she used music to build group cohesion and strengthen the bond between the girls and her.  Through an activity with a tambourine and music, the girls were asked questions such as “If you could be any animal, what would it be” and “If you won the lottery, what would you do?”  During this activity, the girls opened up and shared their strengths and concerns.  At the end, one of the girls asked Kaitlin how she overcame stage fright when singing.  Then with Kaitlin’s encouragement, this young woman sang for all of us.  What a beautiful voice she has!

Hats off to Advisors Carolyn Dye and Neoma Hammond who did a wonderful job of coordinating the meeting!  During the Thought for the Day, several girls shared how Girls Town and the counselors have turned their lives around.  It brought tears to my eyes as I listened.  Carolyn taught them about Heart Health for Teens and Harriet Tubman, the first woman veteran who ushered slaves to freedom in the Underground Railroad.  Neoma showed the book table with books donated by members of the GFWC Tuesday Club of Columbia and invited the girls to take a book or two with them to read as part of RAP. Then the girls put on their artistic caps to make Valentines for female veterans at Mexico Veterans Hospital.

After a great tour provided by Kalei Holder, Kaitlin, her mom Susan, Gail Jones, Mary Moore, and I headed back to Kansas City appreciating even more the good things that are happening at Missouri Girls Town.

About the Author: Missouri Girls Town

We rely on supporters like you to help improve the quality of life for the girls at Missouri Girls Town. Giving opportunities including: monetary gifts, estate planning, stocks & securities, and items from our wish list. Partner with us. Your generosity leaves a legacy of lasting impact.